I introduced blue glowing sea before.

In this article, let me show red sights which is related to the sun.

What is Daruma Sunset

Do you know “Daruma Sunset” floating in Bay?

Sukumo Bay, Kochi Prefecture is famous for it.

The name comes from the silhouette of sunset which slowly sink into the sea surface.

Since it’s silhouette looks like Daruma, we call it Daruma Sunset.

Although Sukumo Bay is located in the southern Kochi Prefecture, you can see interesting sights.

It’s mirage caused by the difference between the temperature and sea temperature.

Even in the Autumn to Winter, warm tide come into the Sukumo Bay.

When the sun light passing through the water vapor layer, another sun is projected on the sea surface.

It looks like a daruma by the two suns touching.

When the temperature of the air changes rapidly.

But the temperature of the water changes slowly.

So, winter is better season because temperature is cooled rapidly.

It seems the good day to see Daruma Sunset is following situation.

･Temperature in Daytime is high or Sunny day

･No cloud in the sky

It is said that we can see about 20 times a year.

So if you could see Daruma Sunset, it’s valuable experience.

What is Diamond Fuji

Diamond Fuji is a phenomenon when top of Mt.Fuji and sun overlap.

We have chance to see it twice in a day : morning glow and sunset.

Since the sun looks like a diamond when it overlaps, the phenomenon is called so.

We have a lot of places to see Mt.Fuji in Japan, but place for Diamond Fuji is limited.

Mid October to end of February is the good season to see.

And April 20 and August 20 before and after one week are better.

Lake Yamanaka of Fuji-Five-Lakes in Yamanashi Prefecture is the best place for Diamond Fuji.

Lake Tanuki on the Shizuoka Prefecture is also famous as a sacred place where you can observe Diamond Fuji.

If the air is clear you can see even in Tokyo like this. 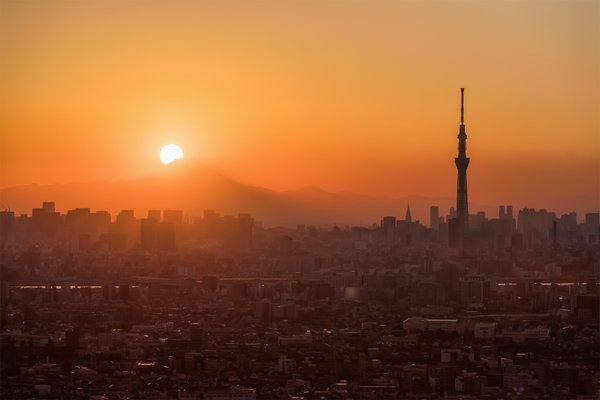 Since the place where the sun rise and sink depend on season, you have 2 seasons to see.

However, there are not so difficult except it.

･Mid October to end of February is the good season to see.

･And April 20 and August 20 before and after one week are better.

･No cloud in the sky

For detail information for places to see, please check for more information.

Research of Japan in terms of geography, Why Japan is popular as tourist destination?

Prepaid SIM is Necessary for Travel to Japan

Should we Cancel Travel To Japan Because of Coronavirus? Info about Cancelation

Be Careful on Hay Fever for Travel to Japan

2 ways how to hire private taxi driver in Japan

Festival(Matsuri) of Japan in Summer That You Should Try Once

Unique Unusual Hotels That Are Becoming Popular in Japan